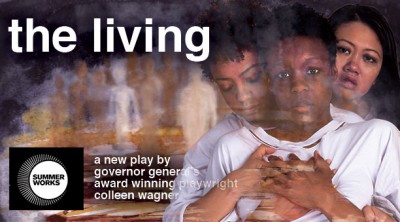 “How can any of us move on if we can’t accept… the impossible?”

A documentary play, The Living examines the lives of both victims and perpetrators who survived trauma in post-conflict zones, post-genocide. Inspired by the actual stories of women and girls who live side-by-side in government-issued housing and undergo NGO-funded campaigns to encourage reconciliation, The Living examines human nature at its most visceral, in hope that the impossible act of forgiveness can end the cycle of revenge.

Jacqui and Henry have known each other since primary school. Henry rescued Jacqui during the genocide and later was part of the mob that killed her father and brother. Their strange, yet loving relationship challenges the vengeful hearts of their community. Henry and Jacqui struggle to face each other by ramming together the idyllic memories of their childhood with the horror of the aftermath of war: AIDS, perpetrators returning from prison facing their own guilty consciences, husbands and wives who barely recognize each other, ghosts of the dead, revenge festering in both hearts and minds, imposed notions of reconciliation, and a crisis of faith. In the middle: impossible love, and a radical approach to reconciliation – transformational justice. Governor-General Award winner Colleen Wagner (The Monument) brings audiences a stirring new play about women on the frontlines of violence, of forgiveness and of redemption.

“I didn’t think matriarchies still existed. I grew up believing that patriarchy was the only paradigm that has ever existed and that war and violence was inevitable and innate in human beings. That’s the big lie.” – Colleen Wagner (summerworks.ca)