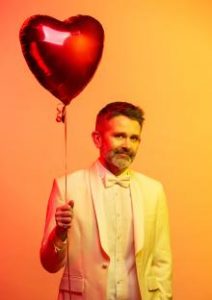 In 1992, novelist Brian Francis placed a personals ad in the newspaper. In total, he received 25 responses but there were 13 letters he never responded to. Now, at a much different stage in life, Brian has written replies to those letters. Featuring a cast of 13 queer actors, Box 4901 is a hilarious, strange, sweet, and awkward look back at how gay men used to find one another. (buddiesinbadtimes.com)