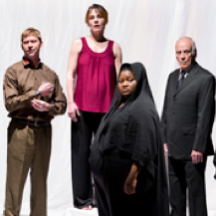 A vivid re-imagining of Ovid’s myth. Procne, daughter of the King of Athens, marries the triumphant war hero Tereus and returns with him to Thrace, leaving her beloved sister Philomela behind. Procne begs her husband to reunite the sisters. Desire triumphs over reason igniting a chain of shattering events. (tarragontheatre.com)