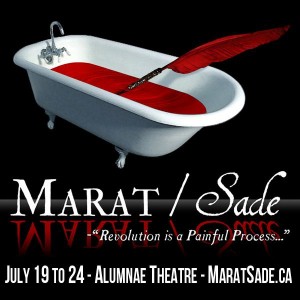 Marat/Sade paints a critical picture of the French Revolution and its unbridled violence through the eyes of eccentric nobleman, sexual deviant, and prolific author, the Marquis de Sade. Using a play-within-a-play structure based in historical fact, Marat/Sade is set in the Charenton Asylum where, as an inmate, the Marquis was permitted to write and mount dramatic works using his fellow inmates as actors, and to perform the completed pieces before audiences of French Aristocrats. (soupcantheatre.com)