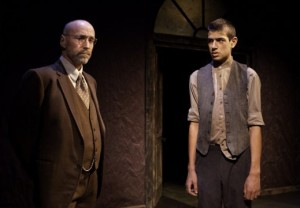 Dr. Janusz Korczak, revolutionary champion of children and signatory to the League of Nations’ Declaration of the Rights of the Child, meets his match in a defiant boy named Israel. When war threatens the children in Korczak’s Warsaw orphanage, it is Israel who comes to the rescue. In the face of looming catastrophe, Israel gives his teacher the greatest gift of all: courage. (tarragontheatre.com)