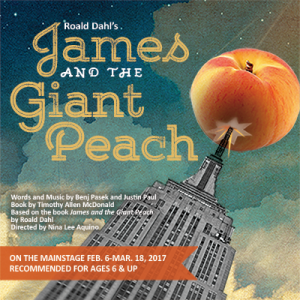 Based on the book James and the Giant Peach by Roald Dahl.

Lonely young orphan, James Trotter has been taken in by the only relatives he has – his outrageously overbearing aunts – but they treat him more like low-paid help than family. When he’s ordered to chop down their scraggly old fruit tree, he discovers a magic potion that accidentally grows the world’s largest peach containing the biggest insects ever seen – and so begins an adventure of enormous proportions! James finds himself cast in the role of peacemaker among the group of human-sized insects with their over-sized grievances. With this collection of entomological misfits, James discovers that loving families are built in many forms. Join him and his delightfully disparate chosen family for their perilous, peachy escape towards happiness.  (Show Press Release)