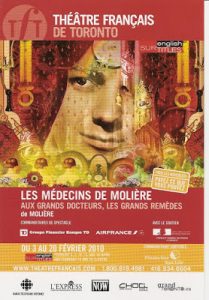 Le Médecin Malgré Lui (The Doctor in Spite of Himself)

Martine and Sganarelle, a married couple, are fighting and Sganarelle hits his wife. Their neighbour Monsieur Robert tries to defend Martine but she protects her husband. Meanwhile, two servants, Valère and Lucas, are looking for a doctor to treat their master Géronte’s daughter, who has gone mute. Martine’s plan is to pass her husband off as a great doctor.

Gorgibus wants his daughter, Lucile, to marry the elderly Villebrequin at any cost. However, Lucile is in love with Valère. She confides her love to her cousin Sabine, who goes to see Valère to explain the problem and tell him that, in order to delay the wedding, Lucile is pretending to be ill. She asks Valère to find someone to impersonate the doctor, who will order Lucile to recuperate at a country house where Valère can easily see her. (Show Program)