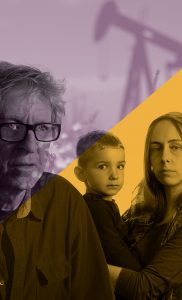 Inspired by the real-life story of Reverend Wiebo Ludwig and his decades-long battle with the Alberta oil and gas industry, Peace River Country follows the lives of a close-knit traditional family as their land, health, and way of life become increasingly threatened by mega-corporations and big government. How does a traditional Christian family living off the land in rural Alberta gain a national reputation as violent eco-terrorists? This fictional account of real-life events is a timely look at the ties of love and loyalty that bind a community. (tarragontheatre.com)