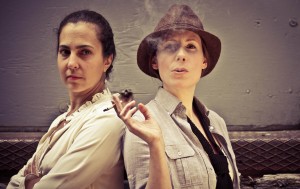 A world premiere by Dora-Award winning playwright Tara Beagan, Jesus Chrysler is an immersive production that revolves around Toronto activist and director Eugenia “Jim” Watts and poet Dorothy Livesay.  An unsung icon of 1930s Toronto theatre, Jim had her work banned by a Prime Minister before enlisting in The Spanish Civil War, becoming its sole female ambulance driver. Livesay went on to become a two-time Governor General Award winner for poetry and an Officer of The Order of Canada. Jesus Chrysler invites you to explore their complex relationship in a show that engages with and questions the intersection of art and politics. (passemuraille.on.ca)