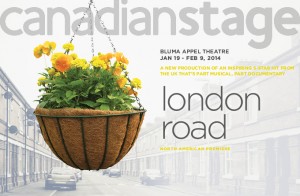 In 2006, the everyday life of the quiet town of Ipswich was shattered by the discovery of the bodies of five women. Playwright Alecky Blythe recorded extensive interviews with the residents of London Road and turned them into an intelligent, startling, and raw piece of theatre set to music by Tony Award-winning Adam Cork. Having captured the heart of England last year, this 5-star musical documentary reveals the ways in which even the darkest experiences can inspire a community. (canadianstage.com)