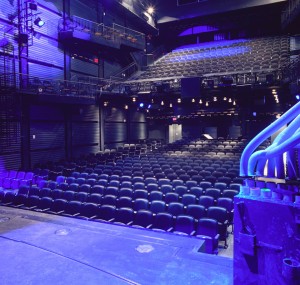 The site of the CAA Theatre (formerly known as the Panasonic Theatre) has a long history in Toronto entertainment. Originally a private residence, built in 1911, it became a theatre – a cinema, called “The Victory” – in 1919. It changed its name in 1934 to “The Embassy” and, in the years since, has been known as “The Astor”, “The Showcase” and “The Festival” (as which it was the premier venue of the Toronto International Film Festival in the 1970s). The Festival became a legitimate theatre in 1993 when it was renovated, renamed “The New Yorker Theatre” and re-opened with the off-Broadway production of Forever Plaid.

In 2004/2005, the original building was demolished (only its facade preserved) and rebuilt, from the ground up, as a new, state-of-the-art live theatre and concert venue. It re-opened as “The Panasonic Theatre” in June, 2005, under the ownership of Live Nation. A new partnership between CAA and Mirvish Productions was formed on December 1, 2018 to include renaming the theatre the CAA.

In January, 2008, the theatre was purchased – along with the nearby Canon Theatre and other Live Nation properties – by the company Key Brand Entertainment. Mirvish Productions announced on August 26, 2008, that it had completed the purchase of both the Panasonic and the Canon Theatre from Key Brand.

At 651 Yonge St., just south of Bloor St., the CAA Theatre (formerly known as the Panasonic) is in the heart of downtown Toronto, within walking distance of the boutiques and galleries of Yorkville, the fashionable shopping of Bloor West and Church Street, the Royal Ontario Museum and the campus of University of Toronto. (mirvish.com)