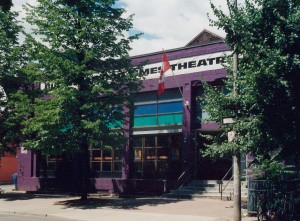 12 Alexander Street has fulfilled many functions.  Built at the turn of the century, it was originally a commercial space that, over time, has served as a mechanic’s garage, a hardware store, a car showroom, and a rehearsal hall. It has also sat vacant on more than one occasion. Since the 1960’s, it has served as an alternative performance venue, giving birth of some of Toronto’s most important independent theatre.

For nearly twenty years, 12 Alexander Street was home to the venerable Toronto Workshop Productions (TWP), one of Toronto’s first experimental theatre troupes. The company completed renovations of the building in December 1967, turning it into an intimate theatre with a capacity of 285 seats. Tragically, 12 Alexander Street was seriously damaged by fire in 1974. Starting in the back of the theatre, TWP’s dressing rooms, costume shop, stage, and lighting equipment were destroyed. Although only a lease-holder on the property, TWP raised the funds to pay for repairs to the building and equipment.

In 1977, TWP’s lease on 12 Alexander expired and the future of the building as a theatre was in jeopardy. However, a public relations campaign led by the company persuaded the City of Toronto to disallow commercial development. The Ontario Government backed an interest-free mortgage, allowing the company to buy the space.

In 1988, TWP disbanded and for the next 3 years, 12 Alexander Street lay dormant and the City of Toronto took possession of the property. In 1991, the municipal government announced a competition for theatre companies to gain a 40-year lease of the building. Buddies in Bad Times Theatre put together a proposal in which a collective of local alternative theatre companies (including DNA Theatre, The Augusta Company, Platform Nine Theatre, and Native Earth Performing Arts) would share the space, with Buddies as the primary resident. In the fall of 1992, the collective was awarded the space, but by that point the other companies had moved on and Buddies became the sole resident of 12 Alexander Street. After an extensive fundraising campaign that saw the community come together to create a permanent home for queer theatre in Toronto, 12 Alexander Street reopened as the new home of Buddies in Bad Times Theatre in 1994. Since then, Buddies has gone on to gain a reputation as the world’s largest and longest-running queer theatre and is an important aspect of what makes Toronto one of the most liberal and accepting cities in the world.